We deliver excellent client service while pursuing recovery of the highest compensation possible under the facts of a given case. 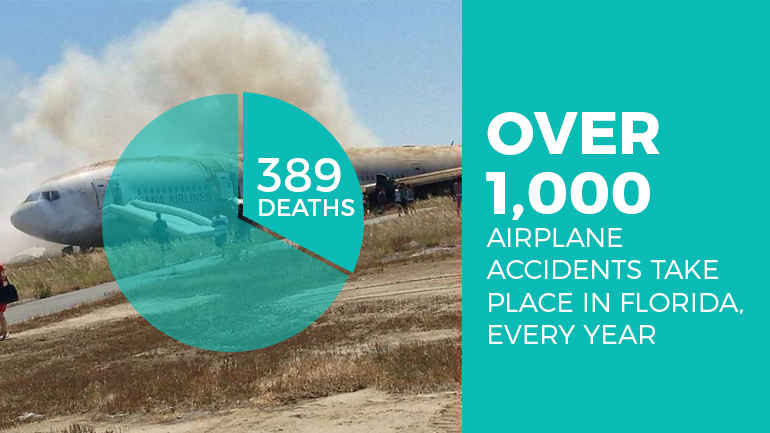 These numbers do not take into account hijackings or crime-related accidents, military accidents, and corporate jet accidents. The recent years have been the safest years for commercial flights. Private plane flights, however, were not that safe. In the last 12 month period, small and private plane crashes resulted in 347 lost lives.

At The Law Offices of Sean M. Cleary, our attorneys have successfully handled cases involving single-engine and multi-engine aircraft accidents, including:

Unfortunately, aircraft accidents do happen, and they are more common among single-engine aircraft. Unlike auto accidents that can result in mild or moderate injuries, airplane accidents are often fatal.

According to official statistics, the most common cause of fatal aircraft accidents was pilot error followed by mechanical failure, weather conditions, and sabotage. Most mechanical failures refer to engine failure. Engine failure is a much more serious problem among single-engine aircraft, as they will almost certainly lead to an accident or, at least, an off-airport landing.

The term multi-engine aircraft covers a wide range of airplane types including twin-, three-, four-, five-, six- and eight-engine aircraft, as well as mixed-power and push-pull aircraft. These planes are designed for various uses from civil to commercial, military, and research purposes. Most of them are either military or large company held airplanes. Although airplane accidents are not part of our everyday life, they do occur more often than one would expect. When large civil airplanes are involved in an accident, the consequences are usually devastating.

If any of these situations can be proven, we'll build a strong case for you and pursue the just compensation either through settlement or in court. We'll make sure the settlement covers all your financial losses, from medical bills or funerary costs to lost wages as well as emotional damages. We handle cases involving some of the most popular types of single- and multi-engine aircraft, including:

The Law Offices of Sean M. Cleary helps passengers injured during commercial and general aviation, whether in-flight or in the course of boarding or disembarking the aircraft. We also represent the families of victims in wrongful death lawsuits.

Airline chance events can have serious consequences for those involved in them. These consequences can be fatal, but not always. In some cases, serious physical injury can result, or even simply severe emotional and mental trauma. Economic damages such as medical costs, lost wages, and decreased earning capacity are important for an injured airline passenger to seek out, but noneconomic damages can be equally and even more important, depending on the circumstances of the case.

Our firm has successfully represented clients in airplane accident cases, including personal injury and wrongful death claims against airlines. These companies, alongside aircraft manufacturers, airport operators, and their contractors, have a responsibility to ensure your flight is a safe one. Sean Cleary has pursued liability and damages claims against the leading manufacturers of commercial aircraft, and the smaller corporations that produce the components and instruments used in long-range passenger planes.

Small aircraft are used for different sorts of personal and commercial purposes here in the U.S. However, they are known for being more dangerous than their commercial counterparts.

Why do people even fly on a small plane? Typically, when you flying commercially you are at the mercy of the airlines and have no privacy. By using small planes you can fly to where you want when you want it. The most accident-prone small planes in general aviation tend to be the aircraft built by nonprofessionals. When it comes to maintenance and performance testing, it seems likely that amateurs built and flown aircraft might not get the attention that a commercial plane would.

Small plane accidents can seriously injure or kill passengers and others. Those who survive such accidents are typically left with serious, life-long injuries and damage. This can include:

Burn injuries are a particularly common problem due to the explosion of fuel tanks upon impact. The reality is that manufacturers often do not install crash-resistant fuel tanks in their units, despite the fact that such tanks can dramatically decrease the likelihood of death or serious burn injuries.

When you have had your life thrown into chaos as a result of injuries or fatalities from a small plane accident, there are many major needs you may have, including financial ones. One thing that can help is getting just compensation. Our firm is committed to providing the best possible representation to those who have been affected by small plane accidents.

Small planes crash usually because of an error made by the pilot. This is not surprising when you consider that small plane pilots require much less training than a commercial pilot.

Even an experienced pilot could still be involved in a crash caused by other issues. For example, small planes have fewer safety devices to assist with system failures. They can be more difficult to fly by using the instrument panel only, and engine failure is catastrophic because they are often single-engine.

With this in mind, it can understandably be hard to receive the compensation one needs to cover medical costs, loss of income or funeral costs. Having the representation of a skilled personal injury lawyer can be a great help in pursuing and recovering damages for injuries or fatalities in a small plane crash.

Many of today's airplanes are charters, not owned by operators. Some owners charter planes to generate income. Others operate their own charter planes and fly to the customers' destinations of choice.

Our lawyer at The Law Offices of Sean M. Cleary knows that the safety of corporate or charter airplane flights can vary from one operation to another. Some charter companies leave a great deal to be desired, while other private aircraft operations have outstanding safety records.

The complexity of charter ownership and the variety of arrangements add to the importance of consulting an experienced attorney when considering an aviation claim. At our Miami law firm, The Law Offices of Sean M. Cleary, our cases have involved all types of aircraft errors.

We represent clients nationwide in a corporate jet accident or charter plane litigation. Our experience with the demands of aviation accident investigation is an important advantage for your personal injury or wrongful death claim.

Our trial aviation legal team has insight and practical knowledge into issues of aircraft operation, aviation safety, and maintenance. We consult with specialists and experts in aircraft design and operation with the goal to investigate cases thoroughly.

When it comes to determining liability in an aircraft accident, several entities might be responsible. The crash can have a number of causes and liabilities, including:

It's not easy to sort out liability for product defects. Manufacturers have the resources to defend their interests, that's why it's important that you work with legal counsel to ensure you have experienced advocacy in seeking compensation for losses related to defective products.

The National Transportation Safety Board (NTSB) is one of the primary agencies responsible for investigating aircraft accidents. In many airplane crashes, NTSB ends up concluding that the pilot lost control in-flight, failed to see a landmark, body of water, or other obstacle and crashed into it, or ran out of fuel. According to some investigations, NTSB experts routinely overlook defective parts and dangerous designs as causes of airplane crashes.

It's important to follow up on evidence that suggests potential design or manufacturing defects with any available resources outside official reports. Working with an experienced aviation attorney can give you a fighting chance in finding manufacturers liable for aircraft accidents, and ensuring you receive fair compensation for your injuries and losses.

What to Expect in Your Airplane Accident Case

How Can The Law Offices of Sean M. Cleary Help You in an Airplane Accident Case?

It’s normal to feel angry, sad, and confused and you may have the desire to seek justice and get those at fault held accountable for their actions.

With emotions running high, it may be best to retain the legal help of an attorney who has extended experience representing aviation accidents victims.

Those who have suffered a serious injury or the loss of a loved one as a result of an airplane accident can and should consult with an experienced attorney to have their case evaluated for potential product defect liability and to determine the best course of action in their case.

Regardless of the causes of an aircraft crash, the kind of plane or experience of the pilot, when you or a loved one has been injured, you can consult with an aviation accident attorney for guidance.

Our law firm is committed to helping individuals harmed by airplane accidents with their legal claims. We have a high level of experience in aviation crash legal issues. We also have substantial resources we can draw on in our representation of aviation accident victims. We use our experience, resources, and skills to help our airplane accident clients understand what obstacles are present in their case and what actions can be taken to try to overcome these obstacles.

Who is responsible for airplane accidents? »

What is the statute of limitations for aviation accidents in Florida? »