Why Is A Left Turn One of the Most Dangerous Driving Maneuvers And Should It Be Banned?

Posted on 01st May 2017 by Sean Cleary in Auto Accidents 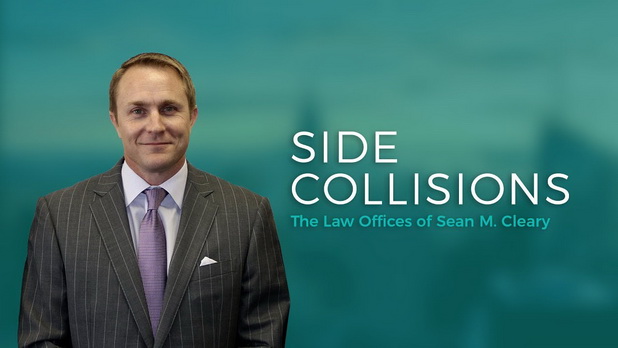 Left turns are more dangerous than right turns because:

A-pillars can create blind spots in the driver's vision. A-pillars are the support posts of the car frame that holds the windshield in place and sustain the roof. The driver's visibility can also be obscured by parked cars.

Why doesn't UPS turn left? Since Bob Stoffel, Senior VP of UPS revealed to Fortune in 2010 the company's tactic to save time and money by avoiding left-hand turns, the elimination of left-hand turns has been garnering interest and fueling opinions.

The left-hand turn is a highly dangerous maneuver. Court decisions determining the issue of liability arising out of automobile collisions have been stressing for decades that the left turn is a risky procedure requiring a high degree of care. Traffic-related fatalities and serious injuries among both drivers and pedestrians occur more commonly at or near intersections, and the left-turn crash is the type of accident most prone to result in serious injuries.

If you are involved in a collision which causes you injuries, you are entitled to file a claim against the other party and get the rightful compensation for your loss. When you do that, make sure you benefit from expert legal representation by contacting us.

How Dangerous Are Left Turns in Miami?

According to the National Highway Traffic Safety Administration, 36% of all accidents occur during a turn or within an intersection. Statistics of New York pedestrian and bicyclist crashes show that left turns are twice more fatal than right turns. Pedestrians and bicyclists are severely injured by a left-turning vehicle at over three times the rate of pedestrian and bicyclist adversely affected by a right-turning car. Left turns are also dangerous to motorcyclists because their smaller vehicles can go unobserved by a driver. 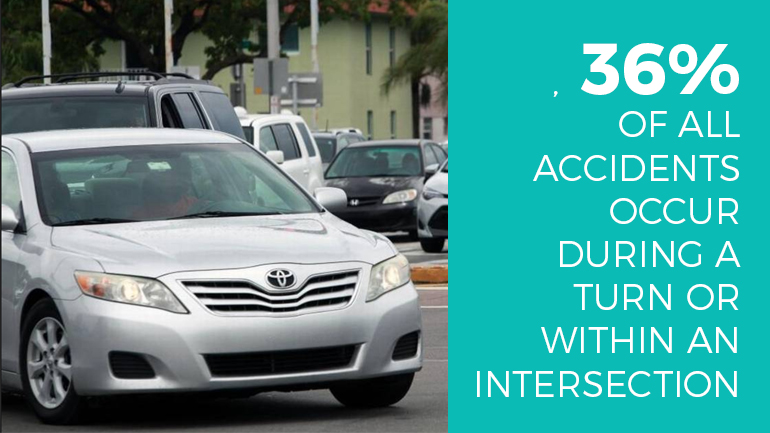 Inattention, distraction, blind spots, and even psychology can be blamed for accidents; a driver looking for cars sees merely the absence of cars, not the presence of a motorcycle.

When turning left, the driver needs to cross completely one lane of traffic after waiting for traffic from both the left and the right. This maneuver requires quick and serious decisions. The driver must judge the speed and distance of the oncoming vehicles and make sure he/she has enough time to turn. To further complicate this maneuver, it is possible that pedestrians will be crossing the street into which the driver is attempting to turn.

Read more about the dangers of Miami left turns in our faq Why are left turns bad in Florida?

Improving the Safety of Left Turns

Various solutions have been proposed by transportation experts to solve the problem of left-hand crashes. One solution suggests a greater offset of the left turn lane of oncoming traffic to the right, allowing a better view of the oncoming traffic.

Another proposed solution is to give left-turning vehicles their own turning phase. For an allotted period the movement in an intersection would be restricted to left turns only. However, this measure is not feasible at every intersection which allows left turns.

Why can't you turn left in Jersey? Another solution, developed and implemented in the state of New Jersey since the late 1950s, is to design jughandles that remove left-turning vehicles from higher-speed left lanes. If designed correctly, jughandles are efficient and can reduce the rate of accidents. However, both traffic analysts and the public complain that the design of current jughandles is obsolete.

Transportation departments from many states are taking second looks and rethinking the mechanics of making a left turn. The ultimate goal is to find ways to improve safety and reduce the likelihood of all types of collisions.

Accidents involving left-hand turns highlight how important it is to have a highly experienced car accident attorney to represent you. A lawyer unfamiliar with car accident cases may assume that if you were making a left-hand turn across traffic, you are at fault for the crash. At The Law Offices of Sean M. Cleary, we fully evaluate the facts of your case to establish if the collision was, at least, partially the fault of the other driver, possibly allowing you to file a claim or lawsuit to recover money for your injuries.