Posted on 19th January 2016 by Sean Cleary in Auto Accidents

A 21-year old woman identified as Jordana Rosales slammed her Mercedes Benz into 2 federal agents in Miami Beach on January 15 and failed to stop, driving off and leaving the injured victims at the scene. The crash occurred around 2 am and, according to Miami Beach police, Rosales was driving a 2015 e350 Mercedes Benz when she hit 2 special agents on Homeland Security business, who were waiting to get into a taxi.

After striking the men, the vehicle continued southbound on Collins Avenue. Rescue crews rushed both men to Jackson Memorial Hospital, one having a broken leg and the other having life-threatening injuries. Witnesses declared that the men had just left Senor Frogs Restaurant and Bar and were standing on the edge of the road talking to the cab driver just before they were hit. They apparently had little time to react, according to witnesses.

An impressive $100,000 bond was set for Rosales, who was detained at Turner Gilford Knight Correction Center. ICE released the following statement about the incident:

"Two special agents with U.S. Immigration and Customs Enforcement's (ICE) Homeland Security Investigations (HSI) were seriously injured in a hit-and-run incident Friday morning while on duty in Miami Beach, FL. The Miami Beach Police Department is the lead agency investigating the incident; at this time, no additional details are available due to the ongoing investigation. As a result of the incident, one HSI special agent is currently in critical condition at a South Florida hospital. The other special agent is hospitalized in stable condition. The names of each special agent are not releasable at this time."

One of the federal agents hit while getting into a taxi on South Beach has died. Identified as Scott McGuire, the victim was an agent with U.S. Homeland Security Investigations. McGuire died Monday from injuries suffered when a car plowed into him earlier this month on Collins Avenue at Espanola Way. He leaves behind a wife and a young son. 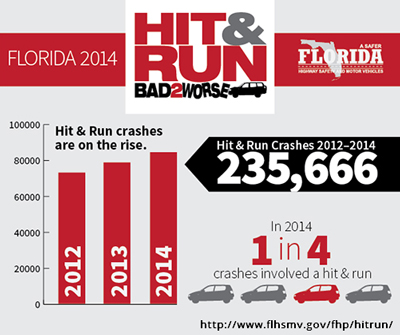 Hit and run accidents are quite common in the state of Florida. The number of these crashes increased 7% statewide from 2013 to 2014 and nearly half of the fatalities occurring in a hit and runs in 2014 were pedestrians, showing a 17% increase from 2013. Although many crashes involved parking lot collisions, there is still a considerable number of them that ended up in fatalities or serious injuries that required hospitalization.

All motorists have the duty to stop and provide help to victims. If the victim dies as a result of a hit and run crash, this could have criminal consequences for the driver. Even if the crash resulted only in property damage, in the case of a crash or collision with an unattended vehicle, the driver must stop and make reasonable efforts to locate, identify and notify the owner of the second vehicle, or by leaving a note with contact details.

Hit and Run Accidents Law and Penalties in Miami

There are various types of damages car accident victims can recover. The most common types of damages include medical expenses, pain and suffering, property damage and lost wages. Medical expenses cover hospital bills and the costs of long-term medical care. Property damage usually covers damages sustained by the victim's vehicle but also other personal items that were affected by the crash. Damages to cover lost wages, both present, and future, are awarded in case the accident resulted in time off work for the victim or he/she lost the ability to work as a result of the accident. Pain and suffering damages are established based on the type of the injury, the pain associated with the injury and the way the injury will affect the victim in the future. Insurance companies will usually pay for all these damages as long as they are reasonable.

If you or a loved one have been a victim of a hit and run accident in Florida, you should contact our office as soon as possible following your accident and bring along all available documents regarding your own insurance policy. We know how frustrating it is not to be able to recover damages following a no-fault auto accident, so we do our best to help injured clients. For more details on Florida car accidents and your legal rights contact The Law Offices of Sean M. Cleary today at 305.416.9805.