The Florida Medical Malpractice Wrongful Death Act: Who Can Sue For Damages?

Florida's medical malpractice laws aren't written to benefit patients. They're written to benefit insurance companies, hospitals, and doctors. In fact, it's important to know what your rights are and what the law will allow because the laws in Florida have made it very difficult to pursue a medical malpractice case. Has healthcare in Florida become more affordable because of the laws that shield hospitals and doctors from responsibility? No. The truth is, laws should be consistent across the board, and everyone deserves their fair day in Court. However, the Florida Wrongful Death Act, Florida Statutes 768.16 et seq. states that when someone dies as a result of medical malpractice, only specific, expressly defined family members can bring a case for the loss of the loved one.

The specific family members who can bring a medical wrongful death case are as follows:

There can be no viable malpractice claim if a family member falls into any other category. 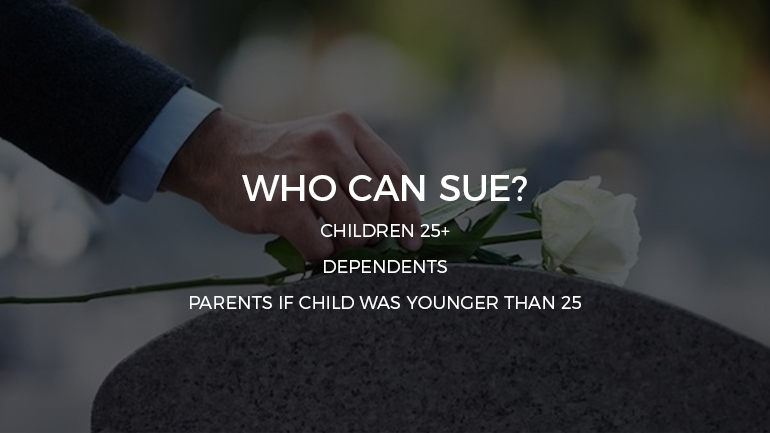 It is a sad reality, and this is how things will remain unless the laws are changed. The law also allows the following:

In Florida, medical negligence is a common occurrence; hence we fight against the legal protection that doctors and hospitals are shielded by.

Can You Sue for Wrongful Death in Florida?

What happens when the hospital or doctor's malpractice causes the death of an 80-year-old widower who was retired? His children may be in their 60's or 40's, and they are devastated by their father's untimely unnecessary death. Unfortunately, under Florida's discriminatory Wrongful Death Act, when there is no spouse, no other dependent relatives, and no children under 25, the only recoverable damages caused by the negligence are the funeral bill and medical bills.

The family is only able to bring a medical malpractice lawsuit to recover bills that may often not go above $12,000. Since it often costs over $40,000 in expenses to bring a malpractice case (expert witnesses, court reporters, etc.), the suit makes no economic sense and would end up costing more than could be recovered.

That is why, all too often, we have been forced to turn cases down, even though the malpractice was egregious and led to someone's death.

Florida's hospitals are full of retired people without spouses. We have a huge elderly population who are divorced, have lost a spouse, or have never married. Because the medical, hospital, and insurance industries in Florida are very politically powerful, the law allows such patients to be killed by medical negligence without recourse.

How to Find a Wrongful Death Attorney

In Miami, 7 out of 10 cases may amount to medical malpractice. At The Law Offices of Sean M. Cleary, our attorney knows how much pain medical negligence can cause and will fight for all the damages allowed under the law.

However, the medical, hospital, and insurance industries lobby, donate, and are given what they want in the name of the false battle cry of eliminating frivolous lawsuits and of tort reform.

The only way this will change is if the legislature recognizes that people are asking for change. As it stands today, the law is not drafted in a fair manner.

As long as that is the case, we will have to explain to other loving families that they do not have a viable medical malpractice claim because they do not fall within the strict parameters of Florida law.

If a doctor's negligence leads to wrongful death, our knowledgeable Miami medical malpractice attorney can review your case for free and will help you protect your rights.