Posted on 28th April 2020 by Sean Cleary in Personal Injury

Just how many passengers and crew got sick or died aboard cruise ships as the coronavirus spread across the world in early 2020? The cruise industry has largely stayed silent about the COVID-19 cases aboard their ships.

No regulatory agency, government, or global health body is known to be publicly tracking the millions of people who found themselves on cruise ships in the first months of 2020. And the cruise lines kept selling cruises and mistreating their employees and customers despite coronavirus outbreaks on board ships and warnings from public health officials.

As no thorough data was made available by officials, the Miami Herald has attempted to track the COVID-19 cases that happened on board. According to the Herald's database, during or directly after a cruise, at least 2,592 people have had a positive laboratory test for COVID-19 and at least 65 people have died. That is likely not the complete picture. The COVID-19 cases found by the Herald were linked to at least 54 cruise ships. That number could also grow as more cases are reported.

According to Bloomberg, Carnival Corp. executives, including the CEO, knew about the coronavirus' spread in China as early as January. But the cruise line didn't take proper safety precautions, ignoring warnings. Carnival's CEO defended the response arguing that it was similar to that of the governments that were slow to react to the coronavirus crisis.

However, the head of the CDC's cruise ship task force said that the COVID-19 infection rates onboard vessels is much higher than what can be seen on land at other public places. She added that cruise passengers are at greater risk of contracting COVID-19 as they're generally more mature travelers. She also pointed out several cruise ships sailed on their trips well after the company knew it was risky to do so.

Below you can see the main cruise lines and the COVID-19 cases linked to them ordered by the number of cases:

Timeline of COVID-19 Cases on Diamond Princess and Ruby Princess 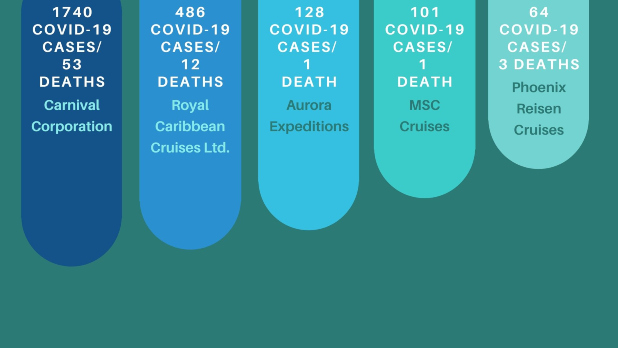 Below is a timeline of the events involving Diamond Princess and Ruby Princess, the cruise ship with the highest number of COVID-19 cases:

February 3: The Diamond Princess docked off Daikoku Pier at Yokohama Port. 2,666 passengers and 1,045 crew members were quarantined on the ship for 14 days.

March 8: The Ruby Princess cruise ship, also owned and operated by Carnival Corporation, docked in Sydney, coming from a previous tour. According to the logs, 158 passengers on board were sick. However, the ship's master emailed port authority officials to report no illnesses onboard. After the ship docked in Sydney, four passengers tested positive.

March 8-9: The same day, 2,700 new passengers joined over 1,000 crew members, without any quarantining or disinfection, and the Ruby Princess set sail for another 11-day trip.

March 19-20: The Ruby Princess returned to Sydney harbor. All of its 2,700 passengers were allowed to disembark, with many heading immediately to domestic flights. After disembarking, one crew member was placed into isolation on the ship, two passengers presented to Sydney hospitals for testing, and one passenger was taken directly to a hospital. Later, all four tested positive for Covid-19.