Posted on 27th October 2017 by Sean Cleary in Medical Malpractice 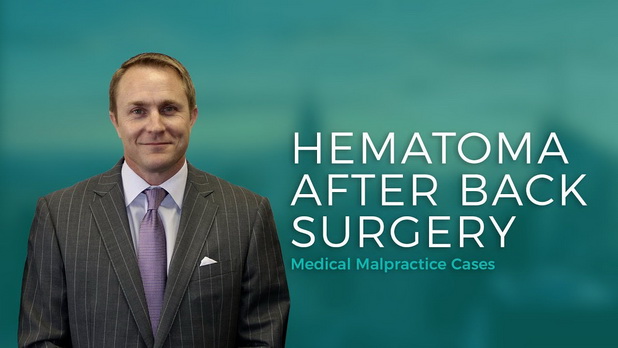 When a surgeon operates on the spine or on any part of the body that is close to the spine, any injury to the spine must be prevented. Our spines carry signals to the rest of the body. When this function is disrupted, it can mean a loss of mobility and a lifetime of paralysis.

There are many ways the spine can be damaged. Some are malpractice related. To get an honest, straightforward evaluation of what happened in your case, talk to our medical malpractice lawyer, Sean Cleary, who has the experience and knowledge to consult medical specialists and find the answers you need.

Unnecessary Back Surgery in Miami: Damages and Liability

A 40-year-old patient had symptoms of a pinched spinal nerve on her left side. Diagnostic films showed a small protruding disc on the right side of her spine but no symptoms on the left side. Although there was no medical correlation between a spinal deformity and her symptoms, clearly no cause and effect, the surgeon nonetheless recommended surgery to correct the protruding disc, which was too small to justify surgery. It was not causing any symptoms. The standard of care prohibits surgery on a protruding disc that was not causing any symptoms.

He closed the surgical site, discharged the patient and left town on vacation leaving no one in charge. The patient ultimately developed a torn dural sheath and rapidly developing paralysis. It was malpractice to leave such a patient with no one to monitor a potentially dangerous condition.

Another surgeon was called in from an unrelated group to perform emergency surgery. The failure to repair the tear resulted in a very extensive second surgery and a worsening of the patient's symptoms including substantial paralysis below the chest and cauda equina syndrome. The only reason the patient underwent the risky second surgery was that the first unjustified surgery was done negligently.

The case settled for a large sum allowing the family to better support and care for the now-disabled family member.

Other Types of Back Surgery Mistakes in Miami

Most spinal surgery errors occur as a result of a surgeon's slip of the hand or poor judgment call. Sometimes people may end up as a quadriplegic because a doctor failed to treat a condition or misdiagnosed it. Here are some examples of medical negligence that can lead to paralysis:

As a result of the surgery, the patient ended up in a wheelchair, having no movement of his lower extremities and no bowel or bladder control.

At no time during the hospitalization did the physician arrange for an MRI of the patient's spine to further evaluate her complaints. On day four of her hospitalization, the physician discharged the patient home without a definitive diagnosis. She presented to another doctor who ordered an MRI of her back which revealed cauda equina syndrome and the patient underwent immediate spinal surgery. However, her condition was irreversible at that time. Today, she continues to live with leg weakness, gait disturbance, and urinary and bowel difficulty.

19 West Flagler Street, Suite 618,
Miami, FL 33130
305.416.9805
Disclaimer: Please note that the information provided on this site is not formal legal advice, also the site does not allow you to form an attorney-client relationship.
Copyright © 2021 The Law Offices of Sean M. Cleary Professional Association