If you experience distressing side-effects after you underwent knee implant surgery, please contact our product liability attorney and he will help you file a claim against the manufacturer to recover the compensation you deserve. 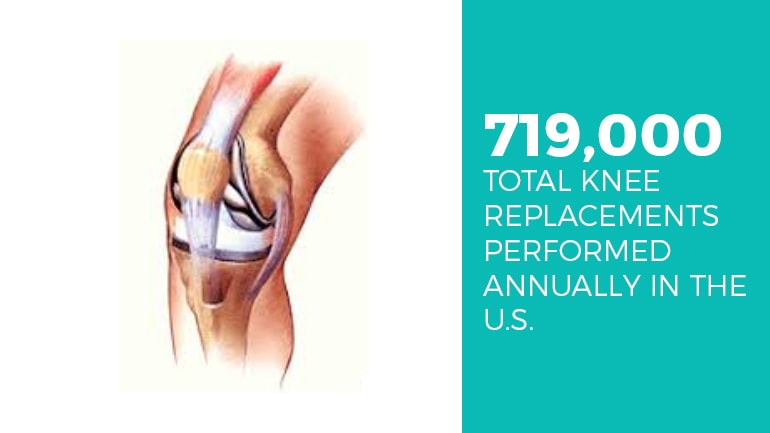 There are 719,000 knee replacements performed annually in the U.S. This number may grow exponentially with a more active and aging population. For some, the replacement was the answer to their daily suffering. For others, however, the knee implant worsened their chronic pain. Numerous knee replacement implant devices have been part of a national recall.

Manufacturers of defective knee implants are responsible and need to be held liable. If you are a victim, do not hesitate to take legal action with the assistance of our law firm, which specializes in product liability.

What Injuries Can a Defective Knee Implant Cause?

Knee implants, as many other medical devices, can have a defective design. There are several manufacturing companies which produce knee implants. At the moment, there are over 150 different types of knee implants available in Florida. Two kinds of knee implants are most commonly used by medical professionals today – total and partial. Most patients choose a total knee replacement implant. Knee implants are designed to last 15 years, although their longevity depends on various factors, including patient’s activity level, weight and bone density.

If you were injured by a defective knee replacement implant, we strongly advise you to discuss your situation with our product liability attorney, Sean M. Cleary, who will provide you with the legal assistance you need. We are dedicated to supporting patients who were harmed by the negligence of a company which manufactures knee implants and will strive to help you recover the maximum compensation from the liable party and their insurance company. The statute of limitations for personal injury cases in Florida is 2 years, so it is important that your case is addressed early.

The Most Recent Knee Implants Recalls

Over recent years, thousands of lawsuits were brought against multiple knee implants manufacturers for defects in their design and function. The following are the larges companies against which people all over the country have been filing claims for defective knee implants.

Zimmer Biomet is a medical device manufacturing company, as well as the world’s largest maker of knee implants. According to a Consumers Union analysis, Zimmer Biomet had 299 knee implant devices recalled. Between 2003 and 2013, the company initiated 224 recalls of knee replacement systems. Their knee implant models received several reports regarding complications and premature failure from patients and doctors. Although they should have lasted 15 years, patients have been complaining about implants loosening as soon as 3 years after the surgery. The recalled models include:

The reasons why Zimmer Biomet knee implants were recalled are the following:

Zimmer Biomet currently has to deal with hundreds of suits regarding high failure rates of knee implant devices, patients complaining about implant failure, loosening of the implant, knee pain and other complications. If you had a knee implant manufactured by this company and experience any complications, you can receive compensation from the manufacturer and their insurance company with the help of our legal team.

DePuy Synthes, a subsidiary of Johnson & Johnson, issued 277 recalls for knee implant devices and components between 2003 and 2013, since the devices were loosening and failing prematurely. DePuy recalled their ASR metal-on-metal hip implants due to the unusually high rate of failure in 2010. More than 9,000 individuals filed claims against DePuy as a result of the injuries they sustained. Since 2013, the company has issued at least five more recalls for components or tools related to their knee implants:

Some reasons why DePuy knee implant were recalled includes:

The first lawsuit in the country involving a premature failure of the DePuy Synthes’ Attune Knee System was filed in 2017. The Attune Knee lawsuits claim that the medical device was defectively designed by DePuy Synthes so that the surgical glue would not properly hold the device to the patient’s tibia bone, thereby causing premature failure, loss of mobility, severe pain, infections or the need for revision surgery.

Stryker issued 118 recalls between 2003 and 2013. Since 2013, Stryker has issued at least 7 more for components or tools related to its knee implants:

The reasons for which Stryker knee implant recalls were made include:

We are currently accepting Stryker knee implant injury cases. If your Stryker knee replacement is defective, please contact our attorney as soon as possible and he will gladly review your case and subsequently obtain compensation on your behalf.

Between 2003 and 2013, one of the major manufacturers of knee implants, Smith & Nephew, recalled 11 knee implant models. Knee replacement implants produced by the company failed to bond to the patient’s natural bones. As a result, some patients who received Smith & Nephew knee replacements required corrective surgery. This procedure exposed them to serious risks of infection, permanent joint damage and prolonged recovery due to the amount of scar tissue resulting from the original knee replacement surgery. These risks were often aggravated because many patients who received knee replacements were senior citizens.

Some reasons why Smith & Nephew recalled knee implants concern packaging errors and labeling problems. To determine whether you have a case against the manufacturer, please feel free to contact our law firm and we will promptly review your case if you have recently underwent surgery for knee replacement which resulted in you receiving a defective device.

In 2016, Wright Medical reached a $240 million settlement agreement for nearly 1,300 product liability lawsuits filed over their metal-on-metal hip implants. If you received a defective Wright Medical knee implant, we highly recommend you to take legal action and seek the financial compensation you deserve for your physical and emotional distress. Our attorney is always ready to review your case and help you with quality legal advice.

What Can You Recover After a Defective Knee Replacement?

The compensation our attorney and his legal team will assist you with obtaining from the negligent manufacturer will cover multiple aspects, such as:

In the unfortunate event one of your family members passed away due to the complications caused by a defective knee implant, we can also help you recover the following:

How Can The Offices of Sean M. Cleary Help You in a Defective Knee Implant Case?

If you underwent surgery for knee replacement and the device failed in any way, causing you serious injury, you have the legal right to recover financial compensation for your suffering. With over 20 years of experience with product liability cases, our law firm will offer you the legal assistance you need to recover the money you deserve, which will cover your medical expenses, health care and treatment. Regardless of the complications your defective knee implant caused you, do not hesitate to contact us right away and we will thoroughly review your case. Subsequently, our attorney will file a claim on your behalf against the manufacturer and you will recover the compensation you are eligible for.

How Much Is a Knee Replacement Lawsuit Worth? »

19 West Flagler Street, Suite 618,
Miami, FL 33130
305.416.9805
Disclaimer: Please note that the information provided on this site is not formal legal advice, also the site does not allow you to form an attorney-client relationship.
Copyright © 2021 The Law Offices of Sean M. Cleary Professional Association