If you or a loved one has been seriously injured in a rear-end collision, contact us; we have the experience and commitment to hold the negligent party accountable for their actions. 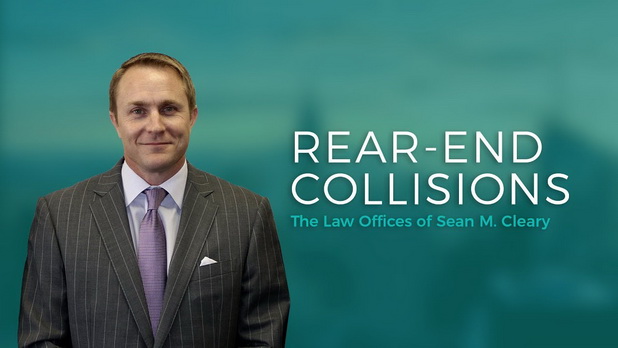 Common Causes of a Rear-End Accident 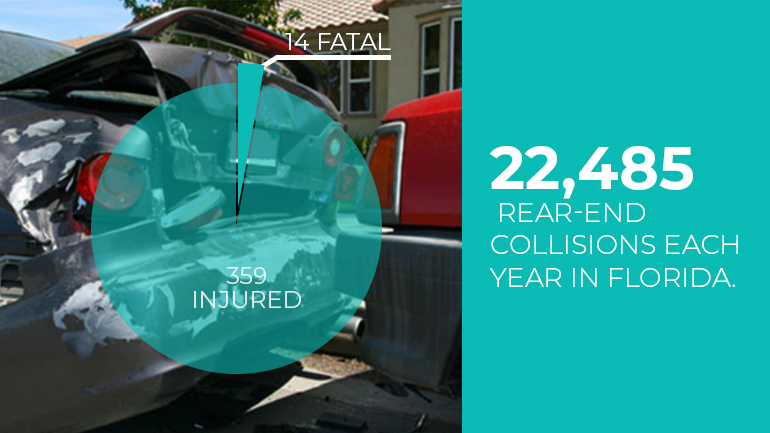 Rear-end accidents are very common in the state of Florida. The NHTSA reports that approximately 29% of all vehicle accidents involve a rear-end crash. Depending on the speed of the vehicles, rear-end collisions can result in damage as light as a ding or as severe as a car trunk being destroyed.

According to the National Safety Council, there are more than 2.4M rear-end collisions reported each year in the U.S. The Florida Department of Highway Safety and Motor Vehicles reports that drivers who followed too closely caused 22,485 accidents in the course of one year, with 14 accidents being fatal and 359 incapacitating.

Rear-end collisions occur when one motor vehicle impacts the rear bumper of the vehicle directly in front of it. Usually, sudden deceleration by the first car initializes a chain reaction in which the following vehicle cannot apply breaks in time. This situation can often result in a multiple-vehicle accident.

Rear-end collisions are especially likely to occur at intersections, in heavy-traffic areas, and on highways and highway off-ramps. Often, deadly rear-end accidents occur in work zones or roadway-construction areas. Thus, drivers should be very cautious when driving through these areas.

The most common causes of rear-end accidents are as follows:

Either your or the other driver’s insurance company could be responsible for your medical expenses and monetary pain and suffering damages. In rear-end situations, it may be easier to settle since it is presumed that the rear-ending driver is at fault.

Often, insurance companies will try to downplay the seriousness of a rear-end accident and refer to severe injuries as mild soreness and shock in an attempt to convince those involved to agree to a settlement before they have the chance to explore the consequences of their injuries fully.

Once an accident attorney helps determine who is at fault for a rear-end accident, they will then try to determine the worth of the case. This is done by figuring out the damages, or compensation, the driver who was not at fault is entitled to. Among other things, these can include:

A rear-end collision can lead to important medical expenses. For an injury such as whiplash, for example, symptoms might not show up for a few days. Medical bills may include:

Lost wages can result due to time missed from work because of an injury. You can also lose pay when you can’t get to work for a few days because your car is damaged. When you provide your lawyer with pay stubs, they will be able to determine how much money you’ve lost due to time from work you’ve missed.

A typical medical consequence of rear-end collisions, even in the case of collisions at moderate speed, is the whiplash. In more severe cases permanent injuries may occur. The rearmost passengers, especially in minivans, are more likely to be injured or killed in a rear-end collision because they benefit little from the short rear crumple zone.

Other types of injuries that can occur are:

If your rear-end injury was due to the carelessness of another driver, our Miami-based and experienced personal injury attorney can help you file a claim and handle the insurance company.

Who Is Responsible for a Rear-End Accident in Florida?

In most instances, the driver who is at fault after a rear-end accident is the one who hit the car ahead of him or her. However, that’s not always the case. For example, in a collision involving more than two vehicles, the first one hits the rear of the second one, which then hits the rear of the third one. The driver of the second car did collide with the third vehicle, but that driver was merely caught in a chain reaction.

There are other exceptions to the general rule as well. The car that was rear-ended might have had broken or malfunctioning brake lights, or may have pulled out of a parking lot or driveway recklessly.

The front car driver might be assigned blame if it could be proved that he or she engaged in one or more of the following conducts:

Florida operates under a comparative negligence system, meaning the overall damages you may recover will be decreased by your percentage of fault in the incident.

How Do We Handle a Rear-end Collision Case?

How Can The Law Offices of Sean M. Cleary Help If You've Been Involved in a Rear-End Accident?

Regardless of whether you were the driver in the front or the rear, our Florida car accident lawyer can represent you and help you obtain the maximum compensation available given the circumstances of your case.

Our dedicated and experienced Miami car accident lawyer is here to help you with your case. Our auto accident lawyer never settles for less than what our Florida clients need to go through their recovery process.

We are experienced professionals who can assert your rights against the at-fault party in a rear-end accident. We will relentlessly pursue the most favorable outcome in your case, whether through settlement or at trial.

Contact our law office as soon as possible after the accident before being pressed by insurance companies into an agreement that you do not fully understand. Sean M. Cleary will review your case, comprehensively explain your options, and will offer you the opportunity to opt for the course of action that suits you best in seeking compensation. We are fluent in Spanish.