If you or a loved one has been injured in a rollover crash in Florida, we can help you recover compensation for your injuries. 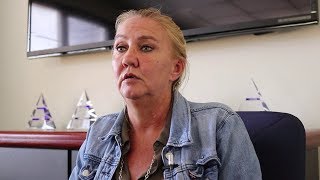 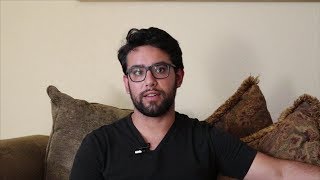 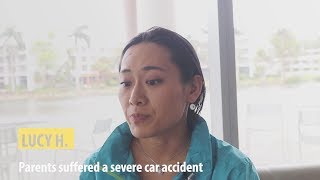 More than 280K Rollovers Are Reported Yearly Across the U.S., Claiming More than 10K Lives 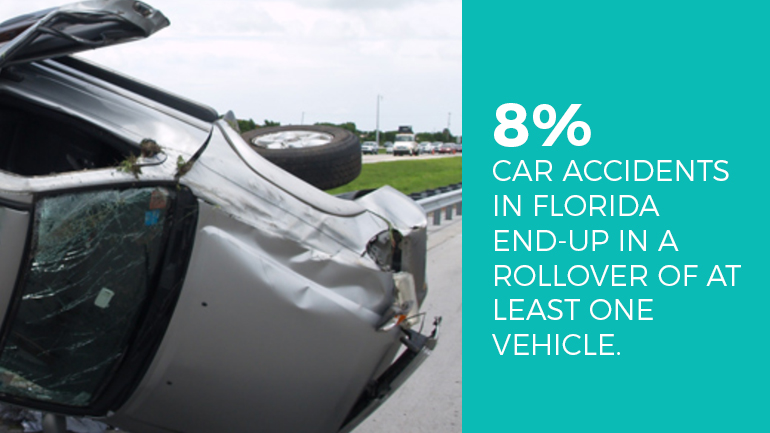 While only 8% of the vehicles involved in an accident end up in a rollover, they are responsible for 20% of serious traffic injuries and 30% of deaths.

Most fatal rollover accidents are single-vehicle crashes that occur on weekend nights.

Drivers are often males under 25 who drive at high speed under the influence of alcohol. Rollover accidents are more prevalent among top-heavy vehicles, such as sport-utility vehicles and trucks.

Many of the severe injuries or deaths resulting from rollover accidents occur because of roof crush. As the roof of a vehicle collapses after a rollover, passengers are exposed to severe neck and head injuries. Despite the federal standards many rollovers still result in roof crushes due to:

Vehicle occupants who sustain severe injuries simply because the manufacturer made a faulty design or used a cheap material for the roof pillars are entitled to file product liability claims for negligence. However, passengers need to be aware of the fact that severe injuries can occur even if the roof does not collapse, but they do strike the roof following a rollover. Such incidents are often seen in the following circumstances:

Compared with any other type of vehicle accident, rollovers regularly result in the most debilitating injuries. As the vehicle is rolling over, it's making contact with the ground, and when it does that, it can get deformed, and the passengers' bodies suffer serious injuries.

Some of the most common rollover crash injuries are:

In the cases when the occupants are wearing seat belts, the most commonly affected areas of the body are the head, the chest, upper limbs, lower limbs, and neck. These injuries occur because most framing and roof structures are not padded.

Vehicles with an Extremely High Risk of Tipping Over 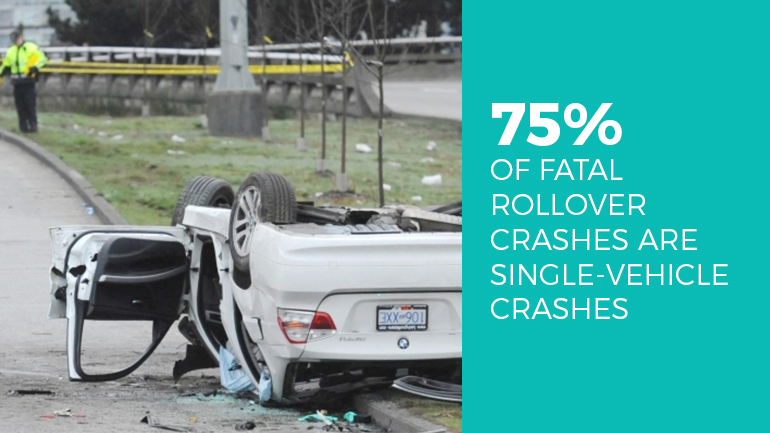 The factor that separates these vehicle models is their design. The higher the center of the mass, the narrower the axle track, and the more sensitive a car is in steering, the more unstable it will be on the road, especially in critical conditions.

At The Law Offices of Sean M. Cleary, we specialize in investigating rollover crashes in Florida. We can handle the complex legal issues involved and fight a manufacturing company's highly regarded lawyers efficiently.

Paying attention to details, we can establish and prove the chain of events that lead to a rollover crash.

Cars with the Highest Risk of Rolling Over

Certain models are known to have higher tendencies of rollover, including:

The data from the National Highway Traffic Safety Administration, Insurance Institute for Highway Safety, and Forbes shows that the cars you should avoid are:

Some of the models that received only three stars in NHTSA rollover ratings are:

Vehicles that were rated two stars in rollover ratings are:

Vehicles rated one star in rollover ratings are: 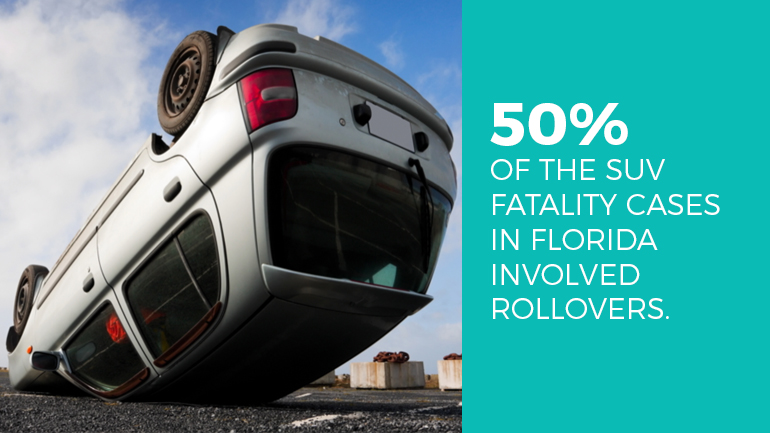 However, driver death proportion for single-vehicle rollover accidents has dropped across all passenger vehicle models, in particular for SUVs.

Single-vehicle crashes involving SUV rollover accounted for three driver deaths/million registered passenger vehicles in 2014. The news is not all bad.

The newest SUVs have improved and have lower driver-death rates than the newest cars. Newer vehicles have better build quality and safety systems, especially important are electronic stability control and side-curtain airbags.

According to IIHS data, the rollover may take place after:

Rollovers may lead to occupants being thrown out from the SUV, increasing the possibility of a fatality.

When it comes to car and SUV rollover statistics, which vehicles finished last, being more prone to tumbling over? According to a recent report from The National Highway Traffic Safety Administration: 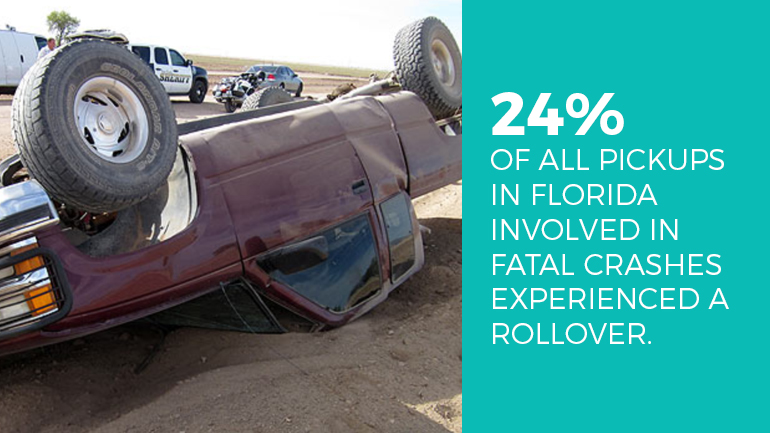 While commonly heavier, pickups are safer in multi-vehicle crashes, but they've been shown to be at a disadvantage in single-vehicle accidents, which comprise 43% of fatal accidents.

According to NHTSA statistics, in single-vehicle crashes, pickups have more than double the probability of rolling over. Data shows that pickups largely have a greater fatality rate than cars of comparable weight.

By their very design, pickups result in a higher rollover rate than passenger vehicles and drivers tend to increase the rollover problem with excessive loads and overloading.

Each year, 44 percent of pickup occupants killed in crashes are in vehicles that rolled over. In comparison, 22 percent of deaths in cars are in rollovers.

Pickups are likely to be involved in rollovers more commonly than cars due to:

According to IIHS data, passenger vehicle occupant deaths in pickup rollover crashes were caused by: 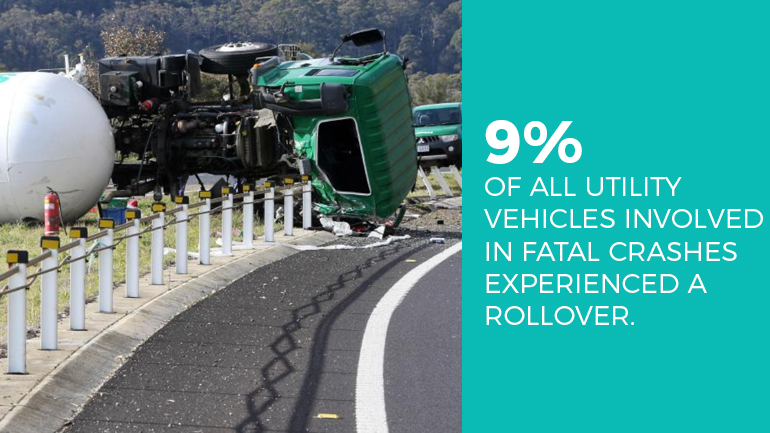 Rollover rates are higher for light trucks, compared to passenger cars, and for vehicles driven by males and younger drivers. Being an occupant in a light truck diminishes the likelihood of a fatal injury given a single-vehicle rollover. Similarly, higher vehicle occupancy increases the probability of a truck rolling over given involvement in a single-vehicle crash, but it diminishes the risk of occupant deaths.

According to NHTSA Florida traffic safety statistics, in 2015, 9% of utility truck occupants died in accidents, while for 1% of large truck occupants, the crashes were fatal. Also, 479 accident cases in Florida in 2015 involved a rollover, and 225 involved a large truck. FMCSA information shows that, in the USA, rollovers were the first harmful events in 5% of all fatal crashes involving light trucks and in 2% of all nonfatal crashes involving large trucks.

Rollovers may be caused by a combination of factors related to the driver, conditions, vehicle design, and cargo. Probable causes of a rollover accident involving utility trucks include: 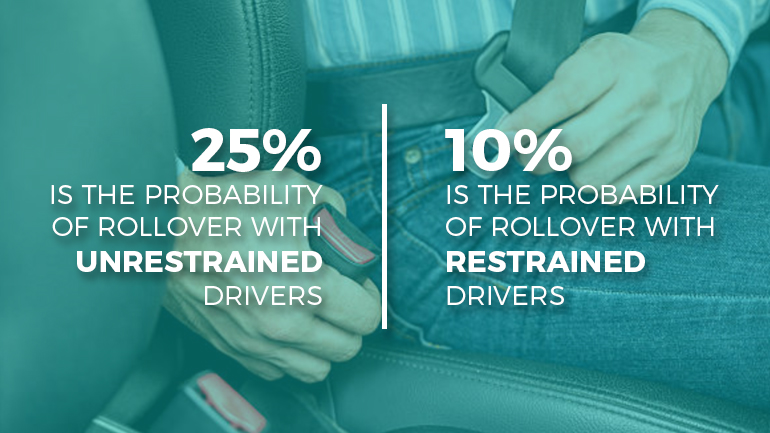 Reports show that 15 passenger vans, like those used to transport college athletic teams, church groups, or vanpools, have a markedly greater risk of rolling over when loaded with passengers.

The NHTSA issued a warning when a study concluded vans are three times more prone to go over when transporting 10 or more passengers than when carrying lighter loads.

According to the NHTSA traffic safety facts, the number of van occupant fatalities increased by 95 compared with previous years, a 9.3% increase. In Florida in recent years, the percent of van crash deaths was slightly decreased from in the early 2010s.

Rollover propensity in single-vehicle crashes may be influenced by: 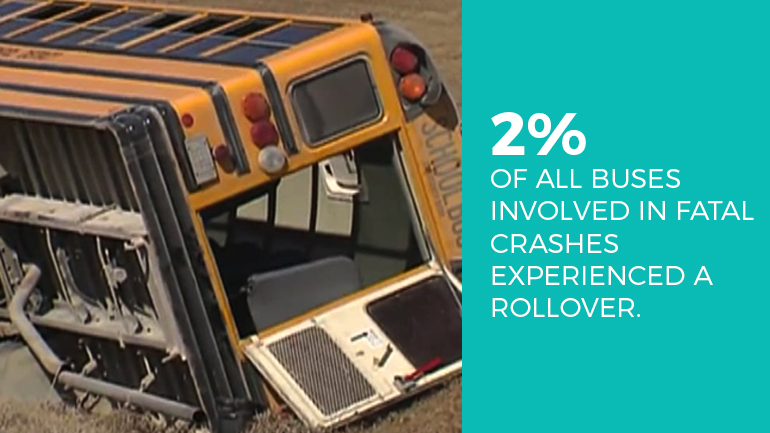 Although in the case of buses the rollover is relatively rare, it is the most dangerous one. Types of buses most commonly involved in rollovers are long-distance tourist buses, small buses, intercity, and local buses, double-decker buses, school buses, and city, local buses.

The number of casualties/accidents in bus rollover crashes is around 25 and in frontal collisions, the second most dangerous bus accident type, the number of fatalities is around 17.

Florida, and in particular the Miami area, is filled with buses, including school, city transportation, tourist buses, so bus accidents are relatively common and usually involve injuries of numerous individuals.

In a rollover, the occupants may be endangered by four mechanisms: 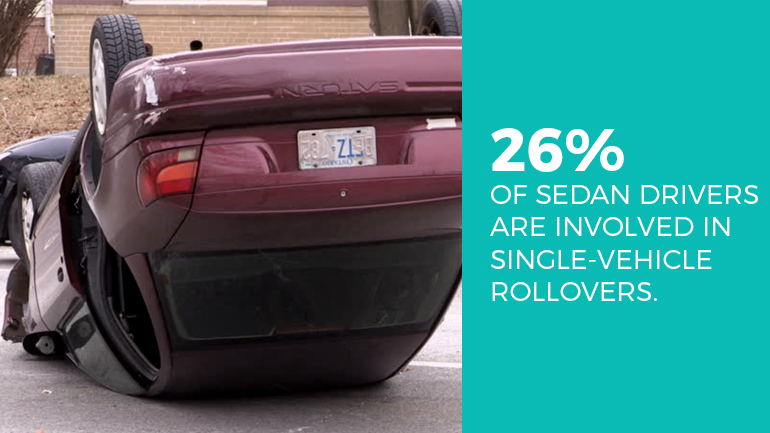 More than 6K passenger vehicle occupants die in rollover crashes every year. 28% of these accidents involve no other impact.

18% of passenger occupant deaths were caused by cars rolling over after no initial impact. The greatest rollover rate for passenger vehicles involved in a single-vehicle crash was correlated with striking an embankment, at an approximated 30%, followed by hitting a culvert, curb, or ditch, at an approximated 17%. Rollover propensity in passenger cars single-vehicle crashes may be determined by:

Preserving Evidence in a Rollover Accident

Rollover accidents are among the deadliest ones; however, proving liability in such cases is often difficult, especially if defective vehicle design was involved. In the unfortunate case you are the victim of a rollover accident, it is essential to establish what injuries occurred. In assessing the accident scene and determining what caused the vehicle to go sideways and roll over, any information is valuable. The scene itself, witness statements, and the wrecked car are vital sources of information.

The most important thing you must first do is receive or find medical assistance. These types of accidents result in serious injuries that most often are, also, permanent. Be sure to keep all the medical records. The police will create a report. However, the police report is a general source of information.

If you are not incapacitated after a collision, it would be in your interest to collect evidence. Still, your state will not be an ideal one; you will be hurt and disorientated. If it is possible:

Secure the car as soon as possible. The evidence may prove that:

How Do We Handle a Rollover Accident Case?

In a rollover crash case, the first thing we do is to go out to the scene and try to determine what were the causes of the collision.

At The Law Offices of Sean M. Cleary, we look for external sources such as road obstacles or for particular vehicle defects that have caused the accident by investigating car parts.

After gathering all the relevant information, we get in touch with three types of engineers: mechanical, biomechanical, and accident reconstruction engineers in order to establish as accurately as possible what has happened to the vehicle and its passengers.

We know lawsuits can be expensive, that is why we work on a contingency fee basis, meaning you don't have to worry about not affording our services: we only get paid when and if you recover damages. These fees range from 34%-40% and are paid from the total amount. We do, however, require our future clients to contact us in our Miami-based law firm before any evidence is lost or compromised, before they sign any agreements with insurance companies, and before the statute of limitations expires.