If you were the victim of physical or sexual assault, you may qualify to file a civil lawsuit and hold the responsible parties liable.

Physical and Sexual Assaults in Miami 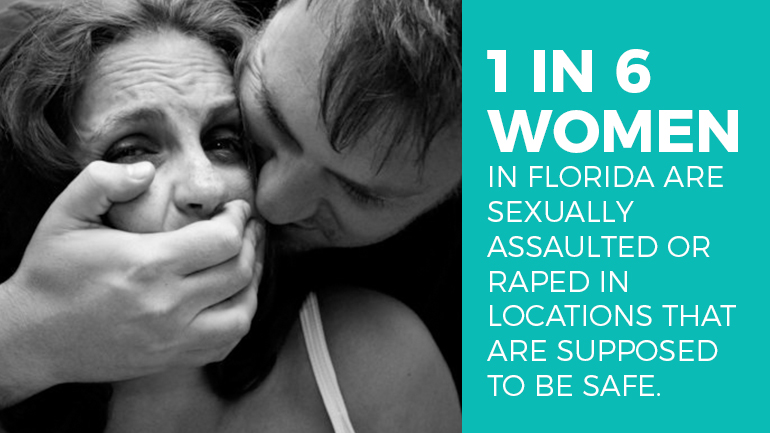 According to The National Intimate Partner and Sexual Violence Survey 1 in 6 women in Florida has been raped at some point in her life; over 40% of the women in Florida have been a victim of sexual violence other than rape; almost 42% of the female victims were under the age of 18 at the time of the first rape; over 20% of the men living in Florida have been victimized by sexual violence other than rape; over 25% of the male victims who have been raped at least once, experienced the first rape at the age of 10 or younger.

The National Institute of Justice and the Centers for Disease Control and Prevention report that 1 in 6 American women has been the victim of rape or attempted rape in her life.

You may be able to file a physical or sexual assault civil lawsuit to recover for the physical and psychological harm you endured. This may be true regardless of the outcome of a criminal case, or even in cases where the individual did not face criminal charges.

Civil Courts Focus on Your Recovery

The goal of a lawsuit in civil court is recovery for the victim. Victims may pursue a civil suit to help them recover damages related to the sexual assault. The stress of providing evidence in a civil case is lower than in a criminal case. This means you need to convince the judge or jury that it is more likely than not that the defendant is liable for your damages. There are still chances to win a civil case even when the defendant was not sentenced to a criminal trial.

Criminal Courts Focus on the Perpetrator

The main idea of the criminal justice system is to establish the individual of a crime and to bring the defendant to justice. Defendants that are found guilty of sexual assault may endure penalties such as jail time, fines, and other consequences. Regardless of the identity of your attacker, you can hold him or her accountable through a civil case, even if you did not pursue a criminal case, through the assistance of Sean M. Cleary, Miami personal injury lawyer.

Victims may be assaulted and abused in the following types of institutions:

While elder abuse certainly occurs at some Florida nursing homes and assisted living centers, it is not limited to such facilities. A striking number of people suffer physical or sexual abuse from caregivers, including from their adult children and other relatives.

Schools, hospitals, churches, or community organizations like the Boys and Girls Scouts, or some similar group allow for intimate contact between an employee and the victim, such as an employee of a nursing home, hospital, or medical facility assaulting a patient or for direct interaction between adults and children.

When people stop at retail locations, schools, businesses, hotels, entertainment venues, and other public and residential places, they expect these locations to be reasonably safe.

If property owners, managers, or employers fail to provide reasonable security, they could be held liable for sexual assaults and physical attacks victims suffer while on their property.

We have experience prosecuting civil claims for physical and sexual assault throughout the State of Florida. You can rely on The Law Offices of Sean M. Cleary to diligently fight for your loved one's rights, regardless of where the abuse occurred. Our Miami-based law firm has almost two decades of experience advocating for injury victims and their families.

Recoverable Damages in a Physical or Sexual Assault Civil Case

Punitive damages may be warranted against an assailant whose intentional conduct causes severe emotional distress. Punitive damages may also be appropriate against negligent third parties whose conduct shows a reckless disregard for the lives of others.

Manifestations of sexual assault include:

Who to Sue in a Miami Physical or Sexual Assault Civil Case?

Physical or sexual assault may cause lasting emotional and physical damages. Our personal injury attorney may be able to help you hold the individual and any other parties liable for the assault.

In a civil lawsuit, you won't have a cause of action for “sexual assault.” Basically, you won’t be filing a lawsuit against the defendant for sexual assault or rape per se. Instead, you will file a lawsuit for the wrongful act that caused you harm. Some possible theories under which to sue in a civil case are:

The reasons for suing aren’t always monetary. Some victims want a sense of justice that this did happen to them and that the assailant will be held accountable for what he or she did.

One strategic reason to name a third party who may also be responsible is ensuring some financial compensation from a person who has little to no assets. For example, you can be successful in a civil lawsuit against a person who assaulted you; but if the assailant doesn’t have any money, you will likely not get any monetary damages. Civil lawsuits against third parties are based on negligence and may be effectively waged against landlords, renters, innkeepers, employers, businesses, government entities, schools, and hospitals. They involve allegations such as negligent hiring or retention of employees, failure to exercise reasonable care in maintaining property, and negligent security.

Besides pursuing a traditional loss of consortium claim, we may file an additional claim for intentional infliction of emotional distress on behalf of the victim's spouse.

How Can The Law Offices of Sean M. Cleary Help in a Physical/Sexual Assault Case?

Victims who suffered a physical and sexual assault on someone else's property may be entitled to compensation. Damages may include medical expenses, lost wages, and future income, compensation for physical and emotional suffering, and money damages for the reduction in lifestyle.

Why is it essential to consult and retain quality legal counsel following a sexual battery? Significant time and resources are needed to conduct the prosecution of a sexual assault and abuse claim. Holding the assailant and their employer, if possible, liable for payment of compensation may also require proof of negligent hiring, supervision, or retention.

An experienced attorney who has a track record of success in legal processes for sex claims is essential to obtaining fair and adequate compensation. The initial consultation with us is confidential and absolutely free, with no strings attached. Our trial lawyer can meet with you at your home, at the hospital, at the long-term care facility, or another convenient location. He will fully explain your legal rights and options. Count on us to provide high-quality counsel and representation.

We only charge contingency fees, meaning we only charge after the case is closed. These fees range from 34%-40% and are charged from the total amount.

What is swimming pool poisoning? »

What are the estimated long-term costs of an amputation? »

How much compensation can I get for an amputation in Miami? »

Can I still recover compensation if I am partially at fault for the accident? »