Is the Dust That Comes out of an Airbag Toxic?

Sodium azide, a chemical found in automobile airbags, could seriously affect your heart and brain if it gets released into the air and you're exposed to the dust or the gas that is formed. But the smoke and dust particles you see when an airbag deploys may come from other various chemicals used to make the airbag open and expand rapidly in the event of an emergency. 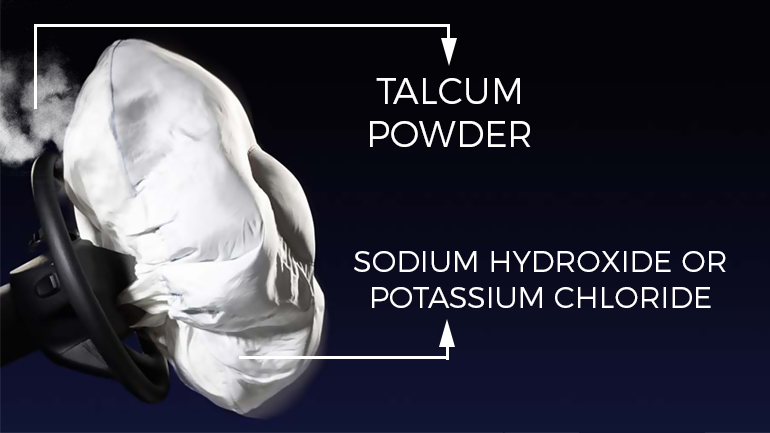 Have you been in an accident where an airbag deployed? Besides the impact of the airbag on your body, you will feel something like a warm powder suddenly covering you. Some airbags used sodium azide as their explosive to generate nitrogen gas and propel. An explosion involving sodium azide may cause burn injury as well as expose people to hydrozoic acid, a toxic gas. According to the Centers for Disease Control and Prevention, you could be exposed to sodium azide through skin contact or by breathing in the dust or the gas that is formed. Similar to cyanide, sodium azide and hydrozoic acid interfere with cellular respiration and aerobic metabolism, preventing the cells from using oxygen. The systems that are most sensitive to acute sodium azide poisoning are the central nervous system and the cardiovascular system.

Sodium azide ensured the airbag device worked efficiently as soon as impact triggered it but it is a potentially deadly chemical. Also, all the sodium azide from discarded airbags was dangerous for the environment. Newer airbags use different chemicals, for example, sodium hydroxide or potassium chloride.

According to auto.howstuffworks.com: "The powdery substance released from the airbag, by the way, is regular cornstarch or talcum powder, which is used by the airbag manufacturers to keep the bags pliable and lubricated while they're in storage." However, the toxic chemicals may come from inside the airbag.

Another chemical, ammonium nitrate, that was used by Takata in its propellant to generate gases to inflate the airbag, turned out to be very unstable and untamable. After a long series of ruptured airbags injured drivers and passengers, Takata airbags became the focus of a global safety crisis with millions of vehicles recalled worldwide.

What Are the Signs and Symptoms of Sodium Azide Exposure?

The effects of the airbag dust may vary from person to person. Some people may not be affected by the chemicals released while others will be. Airbag dust often irritates the mucous membrane and air passages, which has serious effects on breathing. People exposed to a large amount of sodium azide by breathing it, or absorbing it through their skin may have some or all of the following symptoms:

The long-term health effects of exposure to a large amount of sodium azide may include heart and brain damage.

While the airbags may save you from catastrophic injuries, they often produce unexpected ones in the course of doing their job. Many times people don't realize their injuries were caused or worsened by the airbag.

Can I Sue for Injuries Suffered After an Airbag Deployed?

A malfunctioning airbag can give rise to a product liability claim. To win this kind of case, you must usually be able to prove that some component of the airbag was defective when it left the manufacturer, or that the airbag was designed in a way that made it unreasonably dangerous.

The potential defendants in a product liability lawsuit in airbag injury case are usually:

The cause of an accident may be the actions of the driver who hit you or those of an airbag manufacturer if the airbag was defective. In-depth knowledge of product liability and personal injury law will ensure you are getting full compensation, which is why a qualified attorney can help you in these types of accident cases.

What Should I Do If I Think an Airbag Malfunctioned?

The most important thing after an accident is to preserve the evidence related to the airbag.

Remember that, in litigation, it is always the plaintiff’s burden of proving that the defendant was negligent. Because cases involving airbags can get very complicated, it's important to have an experienced attorney on your side. One of the attorney's key responsibilities is going to be investigating what happened in your case and preparing a clear and convincing argument for liability on the part of the manufacturer.

Your attorney will retain the right experts to determine whether the airbag functioned properly. That means enlisting the help of engineers, safety experts, accident re-constructionists or other experts. If you or a loved one suffered an injury due to a defective airbag, contact The Law Offices of Sean M. Cleary, you may be entitled to recover damages to cover medical costs, pain and suffering, and lost wages.

Call Miami-based lawyer Sean M. Cleary for a free consultation if you were in a collision and suffered additional injuries due to an airbag.